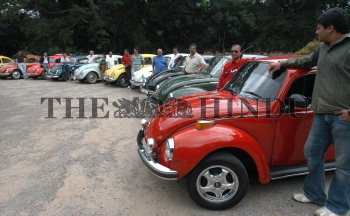 Caption : BANGALORE, 25/09/2007: Vintage Beetle CARS at a rally at Cubbon Park on September 23, 2007. Owners of the CARS have formed a club in the city called Bangalore Beetle Club. Photo: V. Sreenivasa Murthy