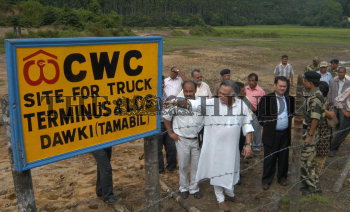 Caption : MEGHALAYA, 24-09-2007: Union Minister of State for Commerce Jairam Ramesh inspecting the site for truck terminus and LCS at Dawki in India-Bangladesh international border in MEGHALAYA about 183 km away from Guwahati on September 24, 2007. Jairam Ramesh inspected the land custom station and took stock of the infrastructure facility available in Dawki from where 150 trucks carry coal from India to Bangladesh every day. Government of India earns worth rupees 48 corers from Dawki alone in 2006. Dwaki become the first land custom station to have the mobile facility in India-Bangladesh border which was inaugurated by Jairam Ramesh along with Chief Minister of MEGHALAYA DD Lapang (not seen in the picture) on September 24, 2007. Photo: Ritu Raj Konwar