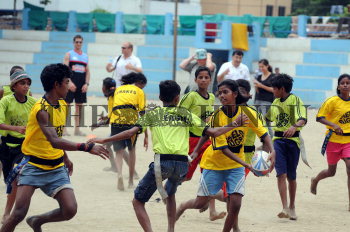 Caption : Kolkata, West Bengal. Date; 07/06/2013. Children from the UNDERPRIVILEGED community are playing rugby under the keen eyes of the British Royal Air Force Spitfires Rugby 7s team. The RAF Spitfires is visiting Kolkata as part of ?Khelo Rugby? programme, a social development project, of the Jungle Crows Foundation. Over the past week RAF Spitfires participated in a Rugby coaching programme for nearly 100 UNDERPRIVILEGED children at Saraswatipur a remote forest village near Siliguri. The RAF team will participate in the Calcutta Rugby 7s at CC & FC from June 8, 2013. Photo: Ashoke Chakrabarty