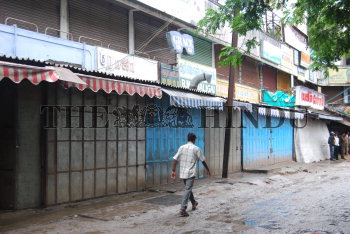 Caption : TIRUPUR,18/09/2007: UNITED IN PROTEST: Shops and commercial establishments remained closed in Pollachi on September 19, 2007 to protest against the decision to attach the Pollachi-Palakkad/Kinathukadavu stretch with the Palakkad Railway Division. Photo: M. Balaji