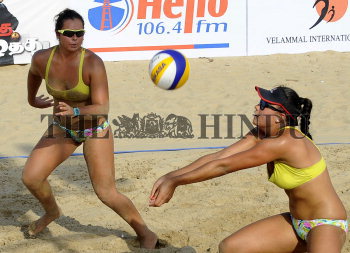 Caption : CHENNAI, 17/05/2013: Jessyka reaches the ball while Mariafe (Australia) looks on against Anila and Aswathi (India) during the league stage of the Asia Pacific under-21 beach volleyball championship held on the sands of Marina in Chennai on May 17, 2013. Photo: S.R. Raghunathan