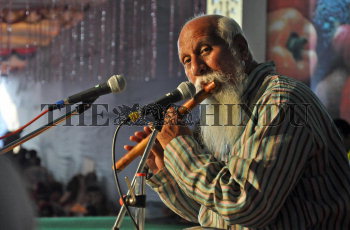 Caption : HYDERABAD:ANDHRA PRADESH:15/05/2013:File photo of Subhash Patri plying FLUTE during the global meditation meet at Mahaswara Mega Pyramid at Kadtal near Hyderabad on 22 December, 2012. Mahabubnagar District Collector has ordered an inquiry into the alleged encroachment of government lands and other allegations levelled against Subhash Patri, founder of Pyramid Spiritual Society of India. Following a report in a regional news channel that Patri allegedly indulged in encroachment of government land and forest area in Kadtal village in Mahabubnagar to build a meditation centre called ?Maha Pyramid?. Photo:G.Ramakrishna