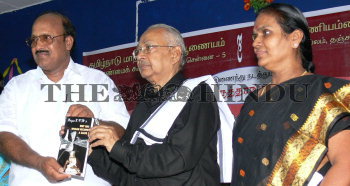 Caption : THANJAVUR, 17/09/2007: K. VEERAMANI, (center) releasing the book 'Why has women become a slave' written by Periyar in Tamil and translated in English. K. Venkatapathy, (left) Union Minister of State for Law, receiving the first copy at the seminar conducted on protection of women from domestic violence act 2005 in the Periyar Maniammai University in Vallam near Thanjavur on September 17, 2007. Ramathal, (right) President, Tamil Nadu State Women's commission is also seen. Photo: M. Srinath