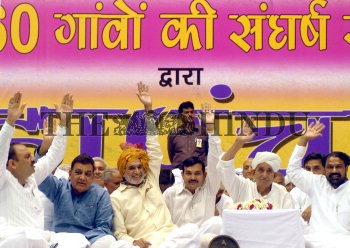 Caption : NEW DELHI, 16/09/2007: Congress MP Sajjan Kumar (third from left) seen with from left- MLAs Mukesh Kumar and S.C.VATS , Convenor of 360 Village Sangharsh Samiti, Ranveer Singh Dabas , President, Meer Singh and MLA Surendra Kumar during a Mahapanchayat in New Delhi on September 16, 2007. Their demands including revision of Delhi Land Reforms Act in favour of farmers and compensation to farmers on the basis of market rate of the lands acquired by the government. Photo by-Rajeev Bhatt