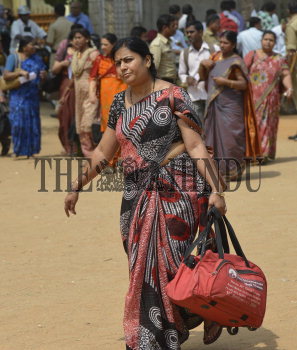 Caption : BANGALORE, 04/05/2013: Polling officials gathered to collect Electronic Voting Machine (EVM) at Rajarajeshwarinagar Facilitation Centre, on the eve of Legislative Assembly elections of the State, before going to their polling station for duty, in Bangalore on May 04, 2013. Photo: K. Murali Kumar