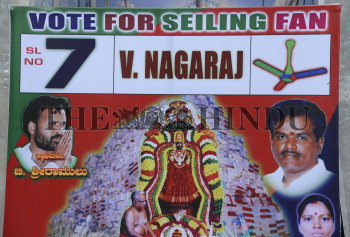 Caption : BANGALORE, 27/04/2013: An autorickshaw which is carrying poster of candidate of BSR Congress V. Nagaraj say 'Vote for Seiling Fan' instead of Ceiling Fan which is the party symbol during the election campaign for Legislative Assembly Elections in Bangalore on April 27, 2013. Photo: V. Sreenivasa Murthy