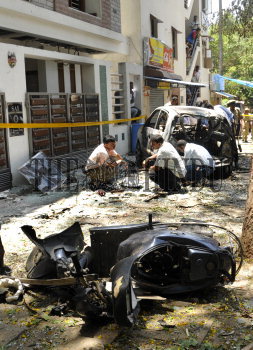 A POWERFULL BLAST ROCKED THE TEMPLE STREE AREA OF

Caption : BANGALORE, 17/04/2013: A powerful bomb blast rocked the Temple stree area of Malleswaram in Bangalore on April 17, 2013. Suspected bomb went off near the BJP office located near Kadumalleswara Temple. Many civilians and policemen seem injured and some in a critical condition. Many cars, two wheelers were seen charred. Police vehicle ripped off and houses nearby were damaged. Photo: K. Gopinathan