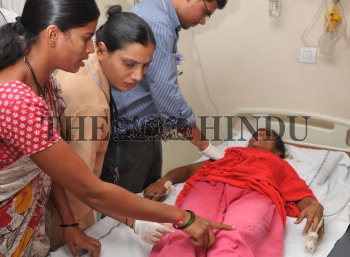 Caption : HYDERABAD, 21/02/2013: Doctors treating an injured in bomb blast in a private hospital, At least 11 people were killed and scores injured in two blasts near Dilsukhnagar in Hyderabad on Thursday night.?It appears to be a terrorist attack, though we have not yet got full information of the incident, while on the way to the blast site. Photo:Nagara Gopal