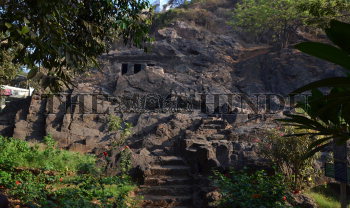 Caption : VIJAYAWADA, ANDHRA PRADESH, 14-02-2013: AKKANNA MADDANNA CAVE: The cave temples of Vijayawada are well known in the archaeological circles. Though they are in a dilapidated state, the Nataraja Cave located at Madhu Chowk and the Akkanna Maddanna Cave on the slopes of Indrakeeladri hill have great historic significance. These monuments, which are over 1,500 years old, are under the care of the Archaeological Survey of India. The huge sculpture of Nataraja on one of the cave temples has weathered and chipped off almost entirely. Archaeologists say it is one of the earliest Nataraja sculpture in the entire country. The cave in the One Town is named after two tax collectors of the Golkonda Sultanate because it was the location from where they supervised tax collection. One British archaeologist believed that these caves were part of the Buddhist monasteries visited by the famous Chinese traveller Hiuen Tsang. Photo:V.Raju