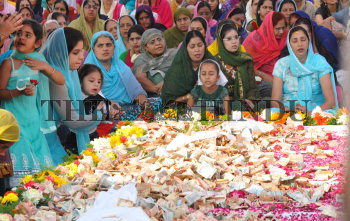 Caption : HYDERABAD.28/11/2012:Women Sikh devotees? offers donations as others listen to GURUbani keetans and Kathas (holy Hymns) on occasion of the 543rd birth anniversary of GURU Nanak Dev, the founder of Sikhism, at a Vishaal Keertan Darbar (mass congregation) in Hyderabad on Wednesday. The five day festivities first Sikh GURU concluded with thousands of Sikh devotees celebrated it with religious fervour, gaiety and devotion by offering prayers. Photo:Mohammed_Yousuf