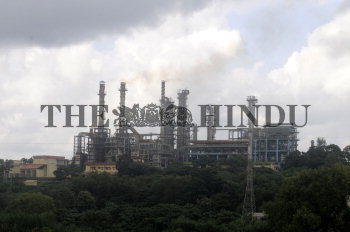 Caption : KOCHI, 03/09/2012: A view of the Kochi Refineries Ltd (KRL) is an oil refinery in Kochi, Kerala. Founded as a public sector company owned by the Government of India in 1963, Bharat Petroleum Corporation Limited (BPCL) acquired the Government of India's shares in KRL in March 2001. Consequent to the merger Order August, 2006 issued by Ministry of Company Affairs, the refinery has been amalgamated with Bharat Petroleum Corporation, hence forth to be known as BPCL-Kochi Refinery. Photo: K.K. Mustafah 03-09-2012