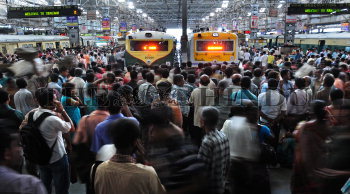 Caption : Kolkata: A day after the collapse of the northern grid in nine states, the eastern grid collapsed at 1pm leading to extensive power outages and severe disruption to public life in the five eastern states of West Bengal, Bihar, Jharkhand, Odisha and Sikkim on Tuesday. The EMU train services have been hit in the major railway station Sealdah and Howrah in Kolkata. Here thousands of passengers are seen stranded at Sealdah station as the train services halted due to shortage of power. Photo: Arunangsu Roy Chowdhury July 31, 2012.