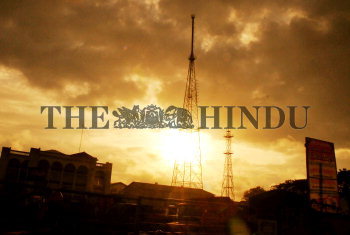 Caption : KOZHIKODE, 14/06/2012: THE GLOOMY PROSPECTS OF GOLDEN SKY:The Malayalam month of Edavam which traditionally usher in monsoon in the State and witness heavy rain, is over. And the Midhunam has set in. But it's Sun who rules the sky instead of the clouds which drifts away sacred of the scorching rays. A scene in the back drop of All India radio signal tower at Kozhikode. Photo: S. Ramesh Kurup