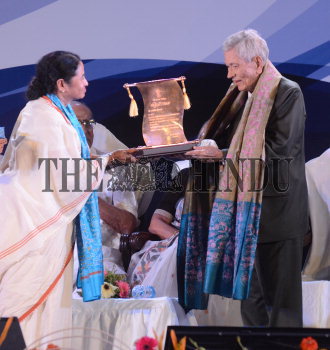 Caption : KOLKATA, 20/05/2012: West Bengal Chief Minister Mamata Banerjee felicitating Olympian hockey player Leslie Claudius with the 'BANGA Vibhusan' award at a function to mark the first anniversary of her government, in Kolkata on May 20, 2012. Leslie was a part of the Indian hockey team that won three gold medals and a silver medal at the Olympics. Photo: Sushanta Patronobish