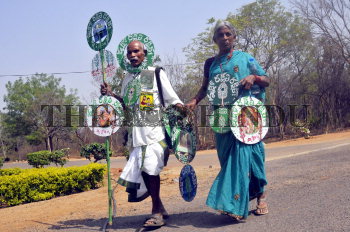 Caption : HYDERABAD, 22-04-2012: 64-year-old Daripalli Ramaiah with wife Janamma during Earth Day celebrations organisged by the AP Forest Academy in Hyderabad on April 22, 2012. Daripalli Ramaiah is one who is more popular than any one else in the Khammam district, thanks to his selfless mission. Familiar to one and all as ?Vanajeevi,? he is a man with thousands of trees growing to his credit. a few iron rings with the message ?Vriksho Rakshati Rakshitah? painted on them and a tiny crowbar used for planting the saplings. Ramaiah genuinely claims to have, in a way, already achieved this goal. Every year he sows a large collection of seeds of the shady trees in the hillocks and barren patches on the highways. He does this all at no cost. he administration has been paying the environmental activist Rs. 1,500 a month to support his mission. Photo:K.Ramesh Babu