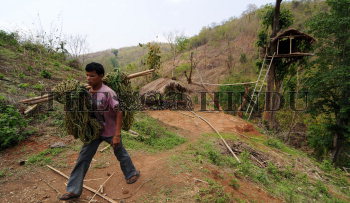 Caption : KARBI ANGLONG, 18-04-2012: Tiwa tribesmen along with the traps on their way for hunting in Boramri village in Karbi Anglong district of Assam on April 18, 2012. Every year this time of the season Tiwa tribesmen perform their age old traditional hunting call ?Jaal Sikar? in the hills which continues for one month. Traditional hunting is a culture practice by the Tiwa and many other tribal communities in northeast India where the tribals hunt annually to check those animals who destroy their paddy fields in the hills. Tiwa is one of the major tribe of Assam inhabited in the Karbi Anglong and Morigaon districts of Assam. Photo:Ritu Raj Konwar