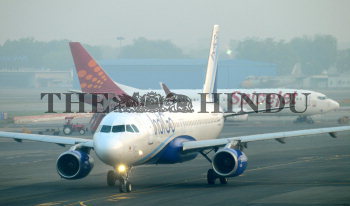 Caption : NEW DELHI, 16/04/2012: An Indigo AIRcraft prepares for takeoff after boarding at the IGI AIRport in New Delhi, despite the turbulence in the INDIAN aviation space is taking a toll even on the only profitable carrier that INDIA can boast of is Indigo, they dismissed allegations that Indigo's profits were a result of sale and leasebacks adding that the AIRline had nothing to hide and its profits were open to any kind of scrutiny, in New Delhi. Photo: V.V.Krishnan