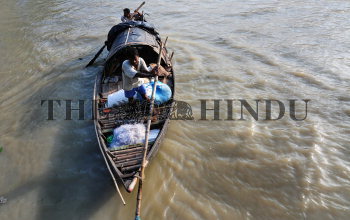 Caption : Kolkata: The fishermen of HOOGHLY river, the tributary of mighty river Ganga finds it hard for catch as the pollution level of the river has crossed the alarming point for long time. Much hyped Ganga Action Plan, which have only spent a huge amount, but hardly became a savior for longest river of the country. Photo: Arunangsu Roy Chowdhury April 09, 2012.