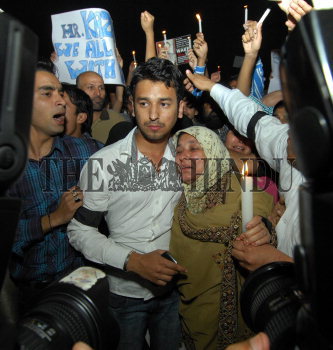 Caption : NEW DELHI, 12/03/2012: Shauzab Kazmi consoling his mother Jahanrara who alongwith thousands of people take part in a candlelight vigil demanding the release of her husband and freelance journalist Syed Mohammed Ahmad Kazmi, at India Gate in New Delhi on March 12, 2012. He was arrested in connection with the BOMBING of an ISRAELI official's CAR in Delhi recently. Photo: Sushil Kumar Verma