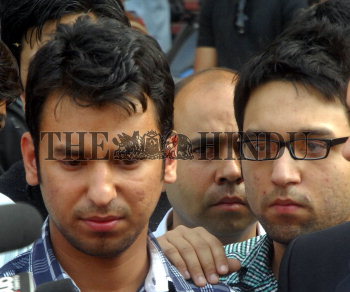 Caption : NEW DELHI, 07/03/2012: Freelance journalist Syed Mohammed Ahmad Kazmi, arrested at Lodhi Road in South Delhi in connection with the BOMBING of a car of the Israeli Embassy on February 13, being produced at a Tis Hazari court on March 07, 2012. At right, Kazmi's sons talk to journalists in the court. Photo: Sushil Kumar Verma