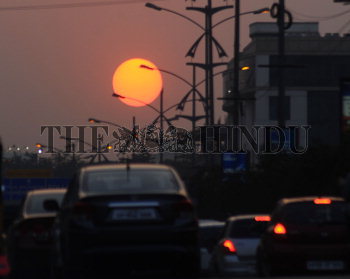 Caption : HYDERABAD:02/03/2012:Fading daylight at the time of DUSK leaving a chance to streetlight to glow as a motorist returns from dayšs work in Hyderabad on March 2, 2012. The city is one of the largest metropolitans of India, and fourth most populous city and the sixth-most populous urban agglomeration in the country.-Photo: Mohammed_Yousuf.