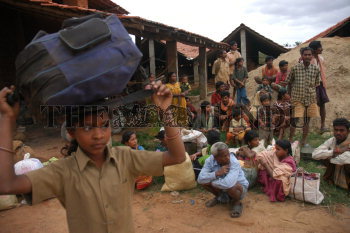 Caption : BANGALORE, 04/07/2007: Labourers from Orissa at a brick factory at Doddahagade village in Anekal taluk, 45 kms from Bangalore waiting to move out after the raids by Labour Department on July 04, 2007. Labour VIOLATIONS such as low payment and even non-payment of wages, besides child exploitation and physical abuse were reported by the workers in heartrending accounts. Photo: K. Murali Kumar