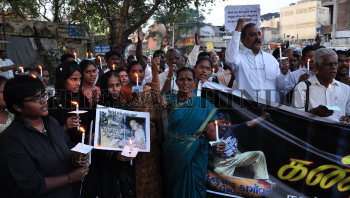 Caption : MADURAI, 27/02/2012: REMEMBERANCE: Members of Joint Action Committee against Religious Fanaticism and Manithaneya Makkal Katchi holding candlelights in memory of the victims of Gujarat Riots 2002 during a protest meeting in Madurai on February 27, 2012. Photo:S.James