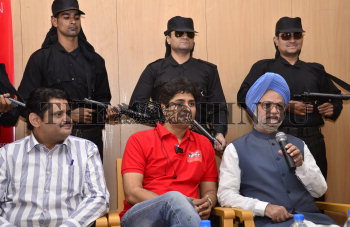 A STRANGE VISITOR AT THE FILM PROMOTIONAL EVENT

Caption : BANGALORE, 23/02/2012: A strange visitor at the promotional event of '498A The Wedding Gift', a motion picture on the misuse of dowry law attracted every one's attention at Press Club, Bangalore. It was Gurumith Singh, an actor who performed in the movie came in the costume of Prime Minister Manmohan Singh. To add to this, there were black cat commandos too. Also seen are Suhaib Ilyasi, film director (second right) and Kumar V. Jahgirdar, President, CRISP (Children's Rights Initiative for Shared Parenting). Photo: K. Gopinathan