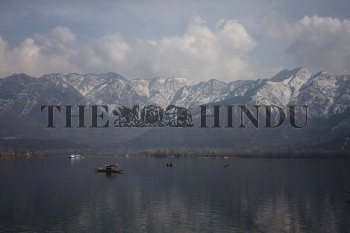 Caption : SRINAGAR, 08/02/2012: A Kashmiri family row their boat at Dal Lake on a sunny day in Srinagar, 08 February 2012. The past weeks have recorded moderate to heavy snowfall in PLAINS and upper reaches of the region. Following the heavy snowfall, authorities issued avalanche warning for upper reaches and areas close to the line-of-control (LoC) cautioning people inhabiting there not to venture in avalanche prone areas. Photo:Nissar Ahmad