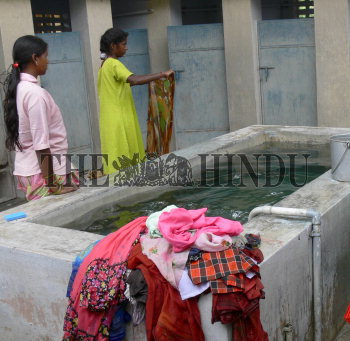 Caption : TIRUPATHUR, 27/06/2007: Women of Badharapalli village panchayat coming under the Pernambut panchayat union, washing clothes at the Sanitation complex near Pernambut in Vellore District on June 27, 2007. It is one among the eleven village panchayats that has bagged the Nirmal Gram Puraskar Award for the year 2006-07. The village has all the basic amenities despite financial constraints. Photo: D. Gopalakrishnan