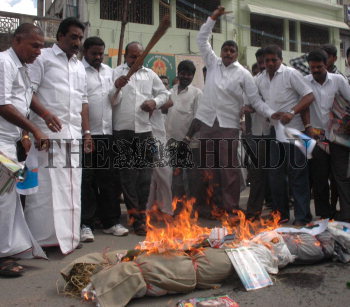 Caption : KANCHEEPURAM, 07/01/2012: Activists of the AIADMK caders burn the Nakkeeran Editor Gopal's effigy and Magazines during a demonstration against his derogatory remarks on AIADMK Party Supremo and Chief Minister J.Jayalalithaa in Kancheepuram on January 07, 2012. Photo: B.Jothi Ramalingam