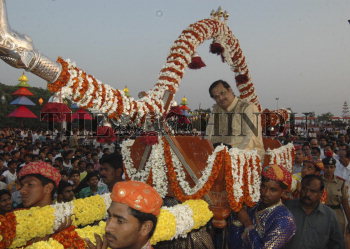 Caption : MANGALORE, 05/01/2012: Hindustani musician Padma Shri Pandit Ajoy Chakrabarty being brought in a palanquin before being conferred Alva's Virasat Award 2012 at the inaugural function of Alva's Virasat 2012 at Shobavana at Mijar near Moodbidri on January 05, 2012. Photo: R. Eswarraj