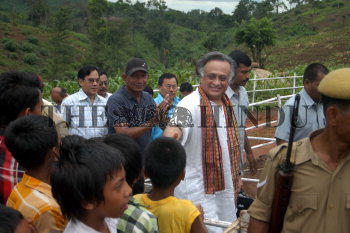 Caption : KARBI ANGLONG 24-06-2007: Union Minister of State for Commerce Jairam Ramesh meets Karbi children afte launching the Spice Board farm at Paroli village in Karbi Anglong district of Assam on June 24, 2007. Karbi Anglong is one of the most backward district of Assam inhabitated by Karbi Tribe and this initiative is to start the organic cultivation of turmeric, ginger and chilli in this district on a large-scale and also to promote its processing and export. PHOTO: RITU_RAJ_KONWAR