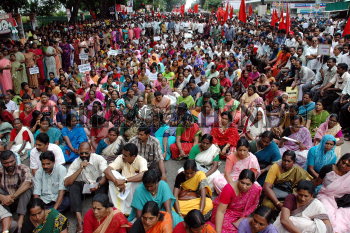 Caption : THIRUVANANTHAPURAM 21/06/2007---The Secretariat march organised as part of a state-wide action by the NGO Union on Thursday June 21, 2007 to press demands like correction of the Centre's anti-people policies, abandoning of the move to privatise pension, restoration of statutory pension in institutions in which contributory pension had been implemented and steps to tone up the civil service. Photo: S. Gopakumar