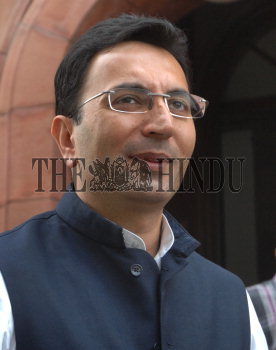 Caption : NEW DELHI, 28/11/2011: Congress MP Jitin Prasada at the Parliament House in New Delhi on November 28, 2011. The Parliament was stalled by the opposition due to UPA government's decision to allow FDI in the retail sectors. Photo: Rajeev Bhatt