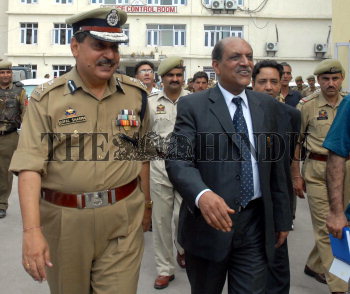 Caption : SRINAGAR, 14/06/2007: Union Home Secretary, Madhukar Gupta along with JK's Director General of Police, Gopal Sharma and other high officials after the press conference in Srinagar on June 14, 2007. Home Secretary earlier chaired a SECURITY review meeting in Srinagar which was attended by highest offcials of all SECURITY agencies in the state. Photo: Nissar Ahmed