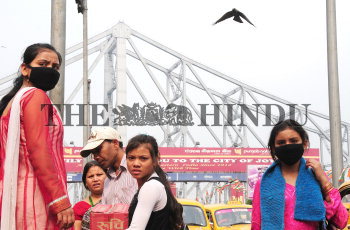 Caption : Kolkata: The family waiting for a taxi at Howrah Station. They arrived from some parts of the country and entering the city of Kolkata by wearing mask to avoid pollution. The 400 year old city has already crossed the alarming level of air-pollution and government takes very minimum efforts to curb it. Particularly, during the winter the dust and smog level comes down very close to the earth and creates havock to its residents. A large number of people suffer in respiratory problem due to the increasing rate of air polution in the city. Photo: Arunangsu Roy Chowdhury November 22, 2011.