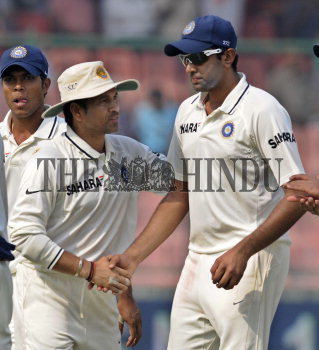 Caption : NEW DELHI, 08/11/2011: India's Ravichandran Ashwin (right), who took six wickets in the second innings, is congratulated by Sachin Tendulkar as Umesh Yadav (ext. left) looks on, on the third day of the first cricket Test match between India and West Indies at the Ferozeshah Kotla grounds in New Delhi on November 08, 2011. Photo: S_Subramanium