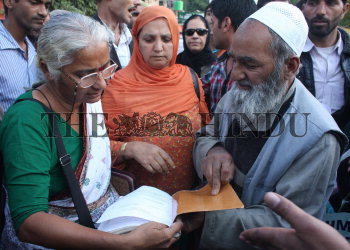 Caption : SRINAGAR, 16/10/2011:A person whose two sons have been subjected to enforced disappearance talks to noted social activist Medha Patekar as the 'Save Sharmila Solidarity Campaign' got started from Srinagar on October 16, 2011. 4,500-km 'Yatra' for revocation of the Armed Forces Special Powers Act (AFSPA). Photo: Nissar Ahmad