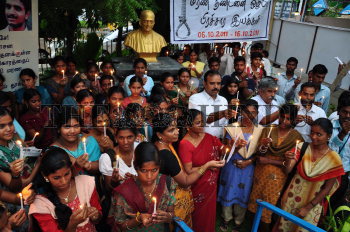 Caption : MADURAI, 10/10/2011: Students participates in a candle light vigil organised by Society for Community Organisation Trust (SOCO) in Madurai on October 10, 2011, to against death penalty and demanding revocation of the hanging orders of Perarivalan, Murugan and Santhan, three individuals, who have been accused of involvement in the former Prime Minister ' Rajiv Gandhi assassination' case. Photo:S.James