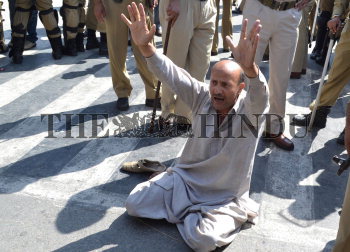 Caption : SRINAGAR, 29/09/2011: Independent MLA Sheikh Abdul Rashid, who had moved a resolution, seeking mercy for Parliament attack case convict Afzal Guru on September 29, 2011, boycotted the proceedings of the State Assembly and staged a protest on the road along with his supporters. Photo:Nissar Ahmad