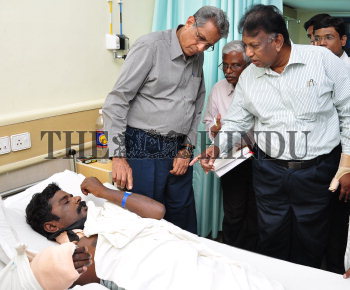 Caption : MADURAI, 28/09/2011: Justice K.Sampath talking to a youth, who has tied black cloth to his mouth in protest, injured in the police firing and convalescing during Paramakudi riots undergoing treatment at the Apollo Hospital in Madurai on Wednesday (September 28, 2011). All the victims of the police firing tied black clothes to their mouth to protest against the Sampath Commission and demanding a CBI probe. Photo:S.James