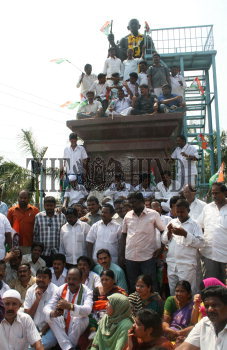 Caption : VIJAYAWADA, 27-09-2011: Congress activists and supporters of VIJAYAWADA MP Lagadapati Rajagopal including a number of former Corporators staged a massive dharna at the Gandhi Statue in front of the VIJAYAWADA Municipal Corporation in VIJAYAWADA on September 27, 2011. Photo:V.Raju