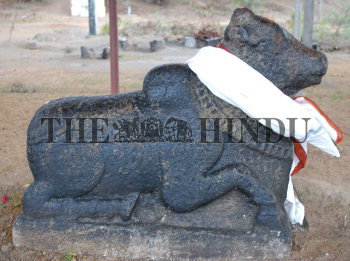 Caption : TIRUCHI, 04/06/2007: Ancient form of Sri Nandi dating back to early CHOLA period unearthed at Kalamavur in Pudukottai district. This is one of the innumerable stone structures and inscriptions found in the village, testifying to the existence of an ancient temple. Picture taken on June 04, 2007. Photo: M. Moorthy