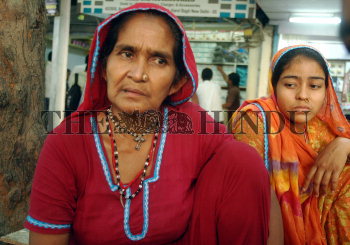 Caption : NEW DELHI, 13/09/2011:Son Dei (left) mother of Ashok who was killed in Serial Bomb Blast of Delhi in 2008 at her residence in Karol Bagh on the third anniversary of Delhi Blasts, in New Delhi on September 13, 2011. Photo:Sushil Kumar Verma