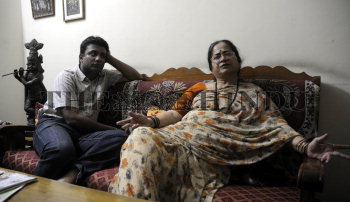 Caption : NEW DELHI, 08/09/2011: Resident of Vasant Vihar, Anuradha Ghorpade along with her son Yashodhan talking about Nalini Aggarwal, her friend and neighbour who was one of the victims of Delhi Bomb blast in New Delhi on 06, September, 2011. Photo: S.Subramanium