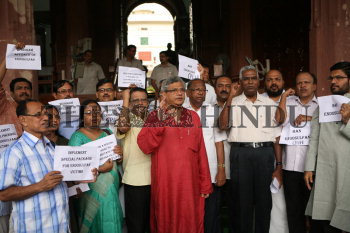 Caption : NEW DELHI, 04/08/2011: Leaders of Left party MPs including CPM Politbureau Member Sitaram Yechuri and CPI leader D.Raja raise slogans during a protest against use of Endosulfan pesticide on the eve of the Monsoon Session at Parliament House, in New Delhi on August 0 4, 2011. Photo: Rajeev Bhatt