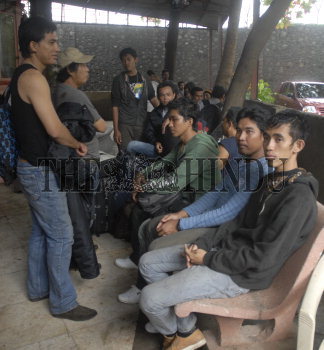 Caption : MUMBAI, 04/08/2011: Rescued Crew Members of the Cargo Ship MV.Rak, which sank off the Mumbai coast, waiting at the Yellow Gate Police Station in Mumbai on August 04, 2011. The Cargo Ship coming from Indonesia to Gujarat, was carrying 60,000 tonnes of coal sank at 20 nautical miles off the Mumbai Coast. There were no casualties and all the 30 crew members were rescued by the Indian Coast Guard. Photo:Vivek Bendre