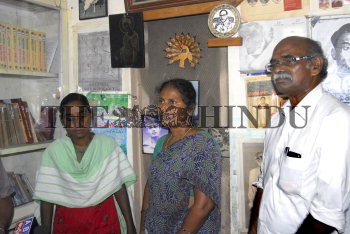 Caption : VISAKHAPATNAM, 21-06-2011:Padma, alias Sirisha (centre), wife of Maoist leader Ramakrishna, and Eswari, who have been released from Koraput jail on June 21, 2011, in accordance with the agreement the Maosits made with Orissa Govenment after kidnapping Collector Vineel Krishna, with president of Virasam Kalyana Rao at Chalasani Prasad's house in Visakhapatnam. Photo: C.V. Subrahmanyam