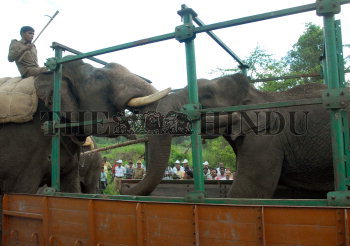 Caption : MYSORE, 09/06/2011: The young wild tusker which went on the rampage in Mysore on Wednesday, was loaded into a truck by Dasara jumbo Abhimanyu and was shifted to Bandipur National Park on June 09, 2011. Photo: M. A. Sriram